One of my great enjoyments as art director of strategy+business — a role I’ve held since 1999, when the magazine was being redesigned — is selecting artwork for each print issue. Each quarter, I work with the designer on my team to choose artists and photographers to create original artwork for the articles and the cover. We work with the magazine’s editorial team to marry the right artist to the right article or topic, commission an illustration or photo, and wait for the creative ideas to roll in. It’s like opening presents on Christmas morning; pleasing surprises are always unveiled. The biggest present is the cover, where the artist must not only not only capture complex ideas in a strong image but also attract a reader’s eye in a field of competing designs on a crowded newsstand.

The packaging for these presents has evolved over the years, from a nearly monochrome style for the first few issues, to sepia-tone photos behind a band of text, to the full-color covers of the last several years. Here are a few of my favorites for a variety of reasons, which I describe below.

Looking back on 25 years of covers also gives me a chance to remember the contributions of colleagues at Opto Design who I’ve been lucky enough to work with on strategy+business: Brad Simon, Jessie Clear, Seulgi Ho, and Kira Csakany, as well as the current team of Laura Eitzen, Jennifer Thai, and Leigh Jagareski. I thank them for their creative work on these covers.

—John Klotnia is the founding partner of Opto Design and has been art director of strategy+business since 1999. 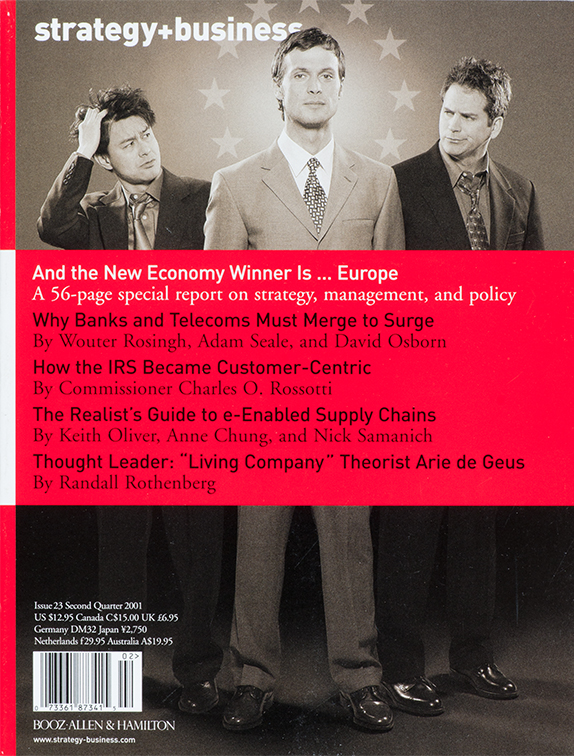 I have fond memories of the photo shoot for this early cover by Opto Design and the lessons learned in hiring models based solely on tear sheets and agency communications. On the day of the photo shoot, I was surprised by the varied heights of each person (since they had all been listed as being over six feet). I asked the tallest model, “How tall are you?” His reply came with a smile: “Six foot, two inches, and I don’t lie about my height.” I like the cover a lot, and, luckily, the range of model heights actually helped the image.

This is one of my favorite cover photographs. Two simple ideas — a line chart and a person on a slide — combine to convey the dire consequences CEOs and their companies face in a rapidly declining market. It looks anything but fun — in fact, it’s terrifying, which was the message we were trying to convey. 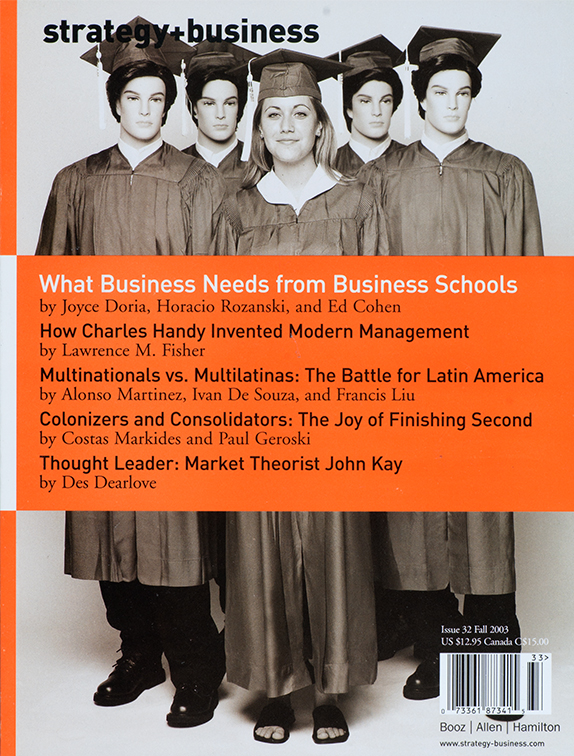 This photograph is by frequent strategy+business artist Matthew Septimus, and it’s a standout from this era of the magazine’s design evolution. The beaming smile of the central model (the daughter of then deputy editor Ann Graham) stands in direct contrast to the choir of lifeless figures behind her and captures perfectly the individual attention needed in business schools, as described in the related article.

There’s abundant energy being harnessed and redirected in Greg Mably’s humanistic yet abstract illustration depicting the ways that people influence the “next wave of the digital economy.” 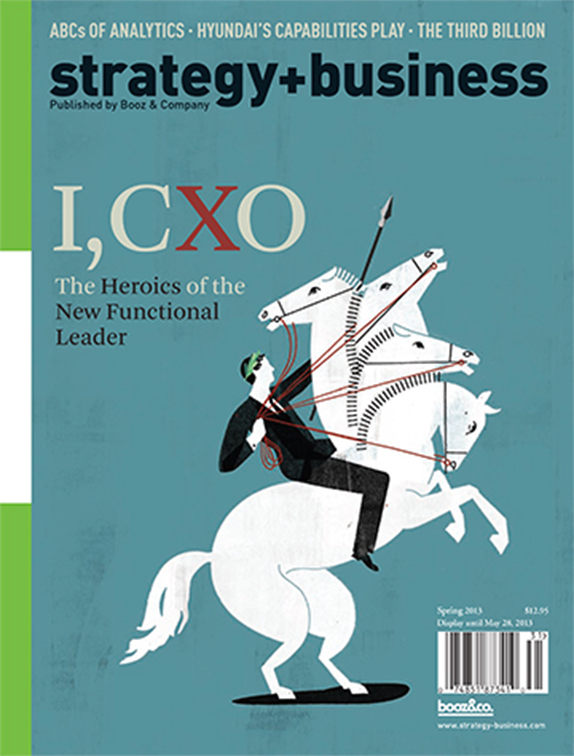 Though not our first use of illustration on a strategy+business cover (that would be s+b 49, which can be seen below, under “Notable covers”), this drawing by Keith Negley is still an s+b landmark because it shows that illustration can be a powerful tool for expressing abstract topics. Negley’s executive equestrian atop a multi-headed horse captures the complexity of the changing role of a functional leader — and even adds a bit of heroism. 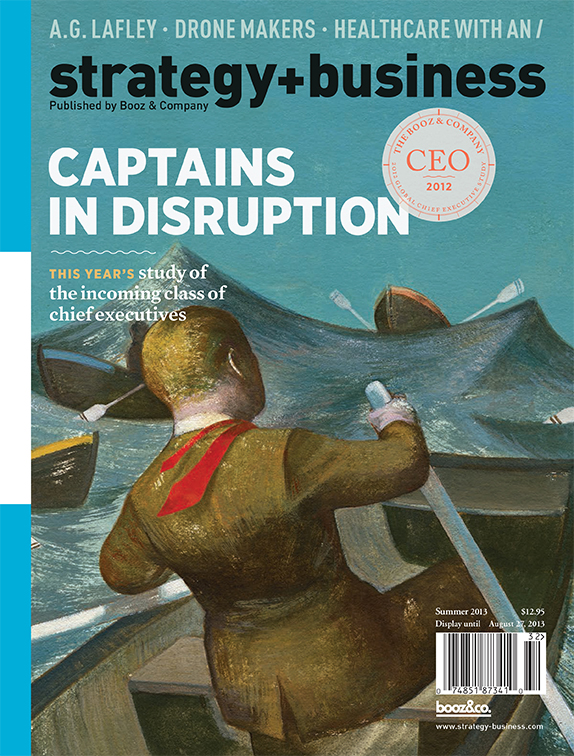 Gerard Dubois depicts a CEO tossed about in tumbling seas to convey the unpredictable forces faced by corporate leaders at this time. Dubois’s illustration evokes both the fear and the excitement of finding a new direction, or simply holding on, in the face of upheaval. 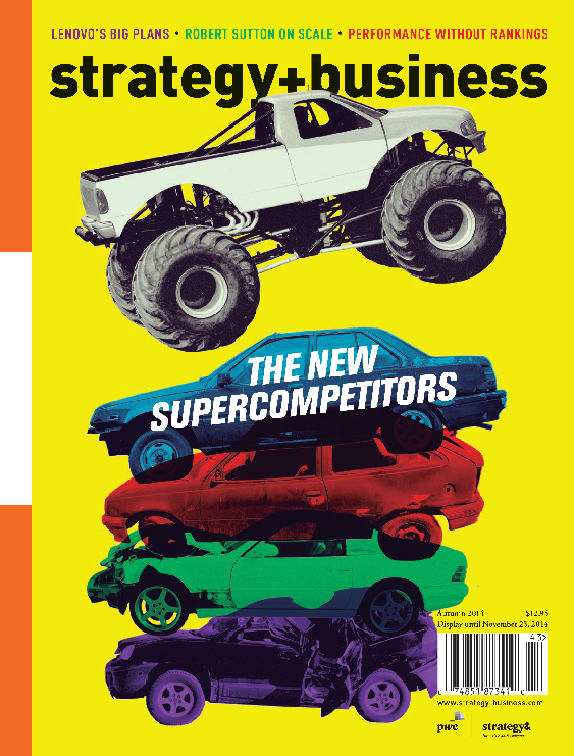 Artist Javier Jaén’s brilliant use of color, scale, and wit — in step with the work of the great design visualists of our time, such as Saul Bass, Bradbury Thompson, and my mentor, Woody Pirtle — makes this one of my favorite covers. For a story about the outsized market share of some companies, nothing says domination more clearly than crushing the competition with a monster truck. Simply genius. 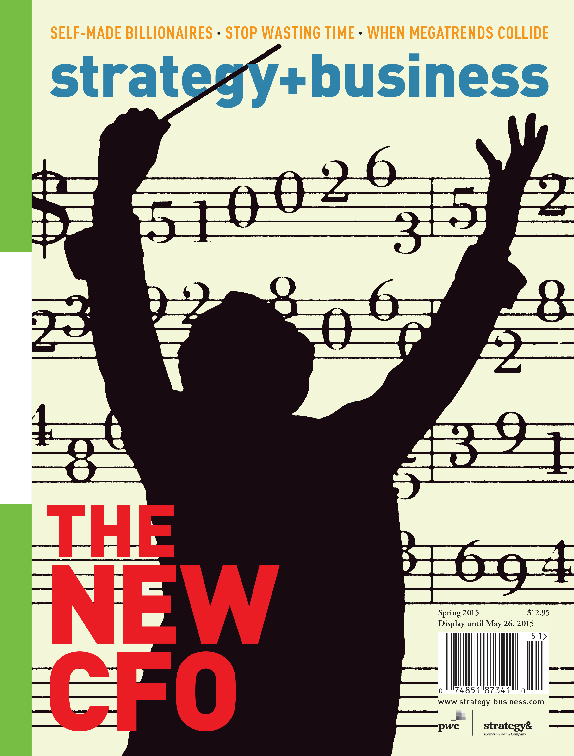 Javier Jaén captures the power and control of “the new CFO,” who acts as a maestro directing business from a composition of numbers. 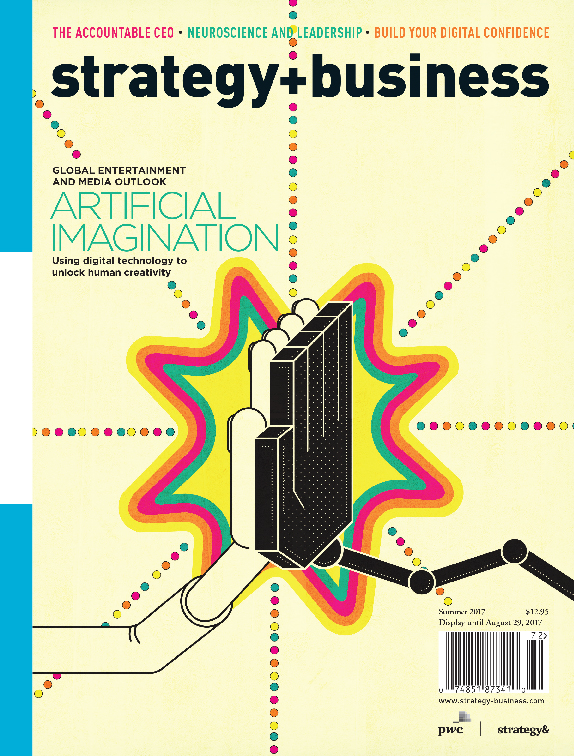 John Hersey was the ideal choice to depict the combination of human creativity and technological advances in this issue’s cover story on “artificial imagination.” Hersey’s style here (and in all of his work) is fun, fresh, and super smart. 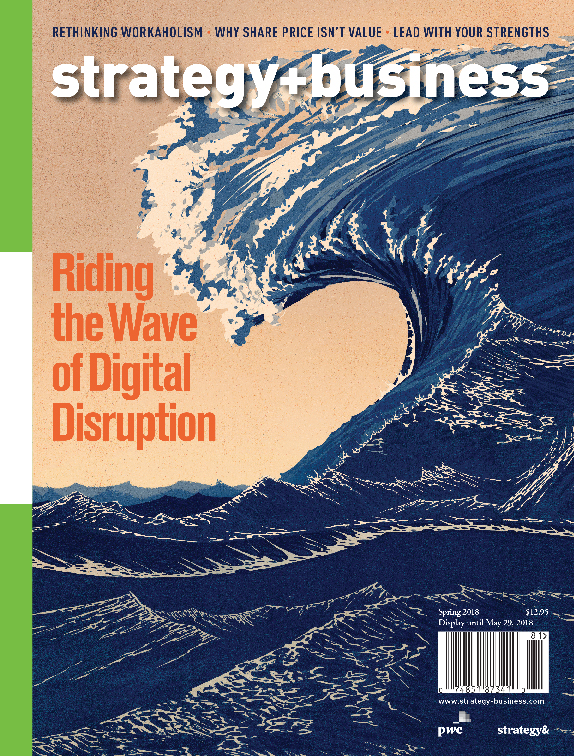 Monumental risk is the base ingredient in Francesco Borgioni’s cover for “Riding the Wave of Digital Disruption.” Borgioni captured the industry-changing energy awaiting those brave enough to mount a digital transformation, while paying homage to The Wave, the famed woodblock print by Japanese ukiyo-e artist Hokusai. André da Loba’s cover celebrating innovation is a lovely expression of the subtle manipulations that CEOs can use to alter the trajectory of a company. 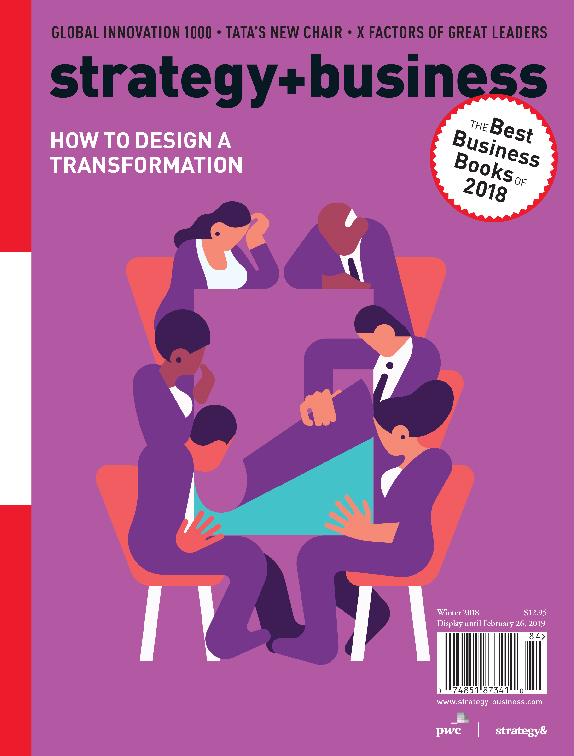 Miguel Montaner has been an amazing artist to work with, and this cover is a great example of his unique iconography, and a marvelous use of color, too. In this image, a notepad becomes a conference table, which is peeled back to reveal the results of a company’s transformation. The postures of the people around the table capture both curiosity and anticipation. 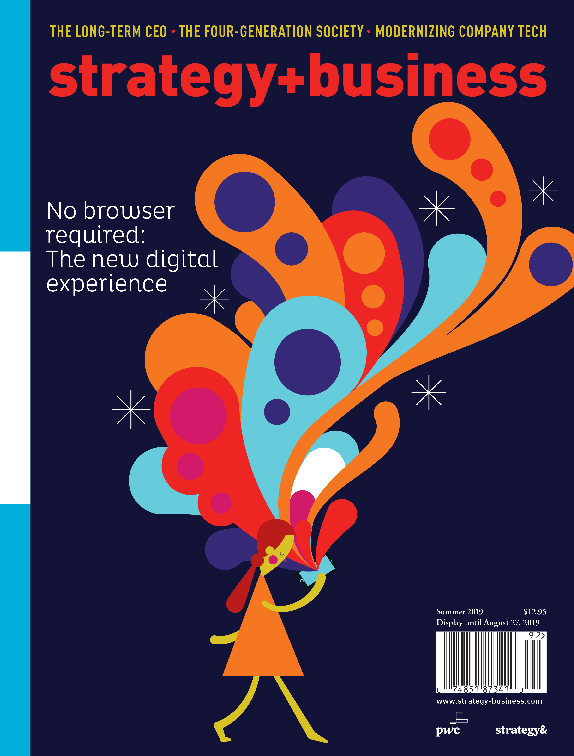 This cover by Patrick Hruby has been a favorite of everyone at Opto and at s+b. Color, joy, and youthfulness all combine to show how digital access can power the world and unleash creativity. A gorgeous cover that made an equally charming animation. 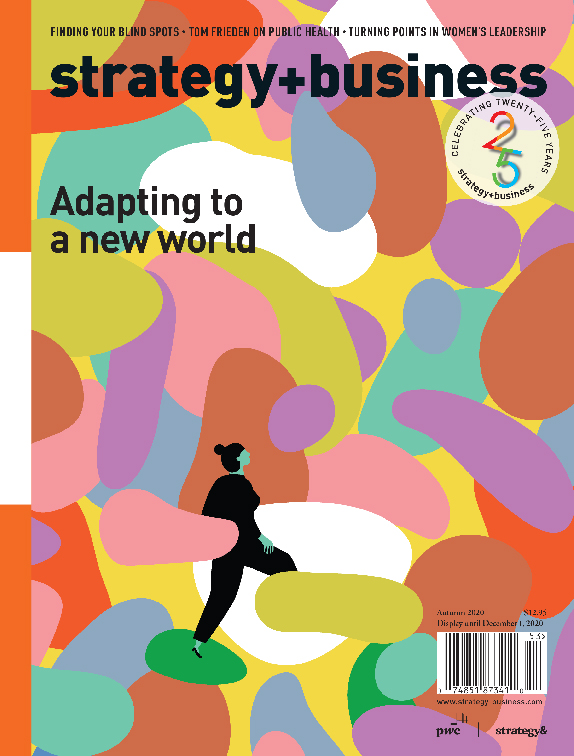 What a spring we faced in 2020, with a global pandemic, world economies in free fall, and rocketing unemployment. André da Loba’s optimistic and playful style is the perfect bridge between these daunting challenges and the opportunities that will follow them in the new world. 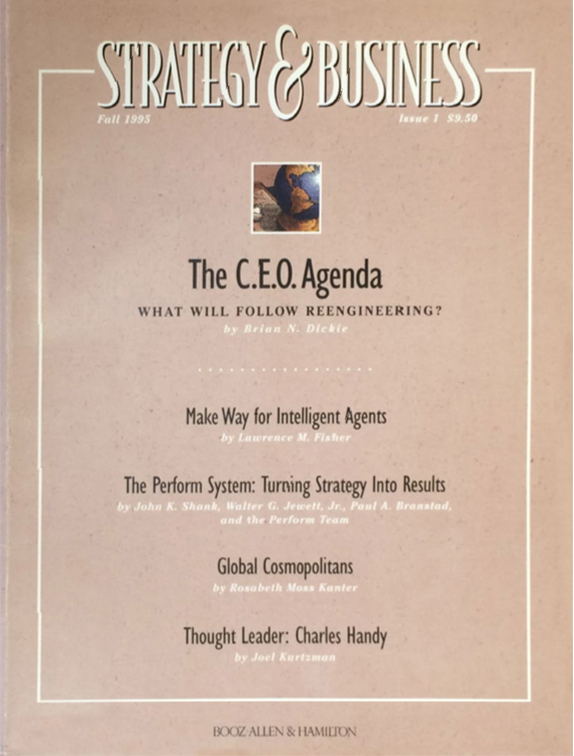 Where it all began. In the early years, the magazine’s design was much closer to the style of an academic journal. Issue 19 marked the first edition of s+b as redesigned by the renowned studio Pentagram (where I worked at the time). The new look introduced the color palette still used today, along with bold elements, such as a large-scale sepia-tone photograph and a bright band of color across one-third of the cover, where the issue’s contents were summarized. Opto Design’s very first cover for s+b happened to be an issue with twice the typical number of pages. With a finite area for headlines within the color band, we faced a challenge in representing the contents on the cover. Inspiration struck when we realized one article recommended management books for “zealots.” We decided to feature book spines in the background photo, where we could layer more headlines as if they were book titles. It was an efficient way to put more info on the cover while adhering to the new design format. 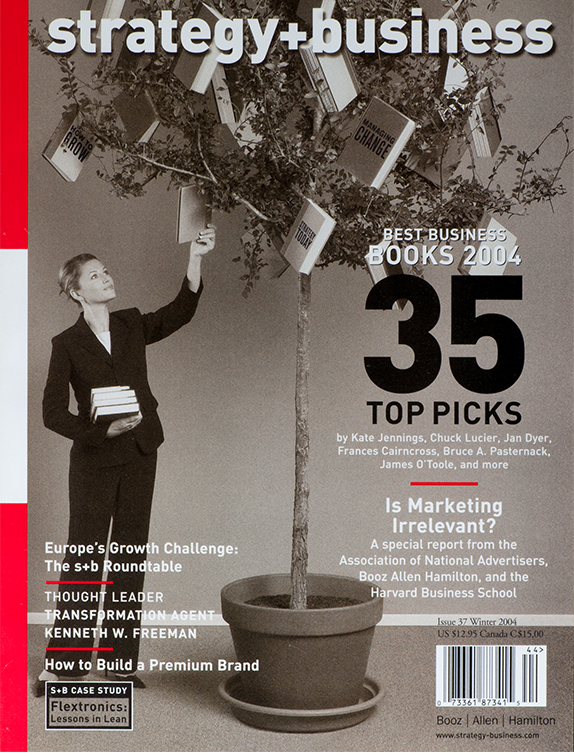 After 18 issues using the redesigned cover format, we wanted to improve newsstand visibility and impact. The s+b logo and headline treatments were modified. An evolutionary, not revolutionary, step, this modification retained the sepia-tone photo but dropped the horizontal band across the cover. This issue marks the first time we used an illustration on the cover, with the talented Dan Page providing the artwork.