Humans Are Underrated: What High Achievers Know that Brilliant Machines Never Will 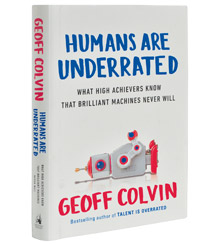 Geoff Colvin opens his new book, Humans Are Underrated, with a particularly grim discussion of the future of work. Computers are becoming sufficiently powerful to take over large swaths of the work now done by humans — not just back-office and middle management work at large corporations, but skilled tasks in fields such as driving, journalism, legal work, psychology, and even war. “The overwhelming message seems to be that, in trying to outperform technology, almost no one is safe for long,” he writes.

The race of humans against machines, which dates back to the legend of John Henry, is very much au courant. The standard response to the threat posed by the ongoing effects of Moore’s Law can be found in Erik Brynjolfsson and Andrew McAfee’s 2014 book, The Second Machine Age (W.W. Norton). The authors recommend, among other things, that workers fortify themselves by getting more education, perhaps through massive open online courses (MOOCs) in STEM — science, technology, engineering, and mathematics — subjects. Of course, Colvin, senior editor at large at Fortune magazine and author of Talent Is Overrated (Portfolio, 2008), points out that work in these fields is most susceptible to takeover by computers. (Not to mention that a clear, if unstated, goal of educational institutions’ use of MOOCs is to save money by reducing the need to employ large numbers of teachers.)

So if studying coding and nanotechnology isn’t the answer, what is? Colvin, who holds an economics degree and an MBA, both from Harvard, suggests that we bone up on a social science: psychology. Specifically, his solution is to double down on the distinctly human trait of empathy, which he defines as “discerning what some other person is thinking and feeling, and responding in some appropriate way.” Empathy is the key to successful social interaction, and “social interaction,” Colvin says succinctly, “is what our brains are for.” Computers are hardwired to make calculations and spit out results. Humans, by contrast, are hardwired to care. In Colvin’s view, empathy is a skill — the only skill that distinguishes us from computers, and the skill we humans must learn if we are to survive and thrive in the 21st century.

Upon first reading Colvin’s claims about the importance of empathy, I had an immediate reaction of skepticism. Does he expect companies to go out and hire thousands of empathizers to carry out the complex work they need done? But Colvin does a pretty good job of backing up his claim with real-world examples. American Express, for instance, told its call-center workers to forget the canned scripts they had always used when talking to customers, and to try to understand — to empathize with — them instead. To implement the new tactics, the company stopped hiring workers with call-center experience and began hiring from relationship-based businesses such as hotels and cruise lines. The result: significantly higher profit margins and lower employee turnover. Other examples Colvin cites come from healthcare systems, such as the Cleveland Clinic; the U.S. military; and even technology companies themselves. He points to the decision of Yahoo CEO Marissa Mayer to bring all the company’s teleworkers back into the office in hopes of sparking the human interaction that can lead to real innovation. Other companies, he notes, are looking more and more for empathetic programmers and designers to serve their increasingly consumer-oriented customer base.

Unfortunately, Colvin points out, the supply of empathy seems to be drying up even as demand is increasing. Empathy is on the wane in the 21st century, especially among younger people — thanks in part to the social networks and smartphones enabled by the very computing power that appears to be taking away our jobs. The ability to empathize is dependent on face-to-face contact with other humans, and doesn’t increase through texting, or friending 500 people on Facebook, or exchanging vanishing text messages.

Luckily, empathy can be taught. Simply letting children play together on their own, make up roles for themselves, and settle disagreements — rather than keeping them pent up in highly structured, parent-supervised situations — improves empathy. Play, in fact, turns out to be a key factor. Colvin notes that role-playing is a critical element of any effort to increase empathy. Several healthcare systems, including the Cleveland Clinic and Weill Cornell Medical College, have put many of their doctors through a role-playing exercise using actors as patients. The result, according to the book: “healthier patients, lower costs, and fewer lawsuits,” and presumably better bedside manners.

Colvin’s argument for empathy also fits smoothly into two currently popular management techniques: teaming and storytelling. Empathy is critical if teams are to be truly successful. And we have entered an era in which teams have taken over the role of the individual in the innovation process. One un-empathetic person — one “taker” — on a team can ruin its chemistry, even if all the others are “givers.” Similarly, the virtue of stories as a key element in getting people on one’s side, whether one is a leader or a team member, has been much discussed in recent years. Again, the reason is empathy: Stories, Colvin notes, trigger a particularly tight, even neural bond between storyteller and audience, one that dates back to our earliest days as language-using humans. Colvin points to how World Bank executive Stephen Denning used stories to convince a recalcitrant institution to make knowledge sharing a key element of its mission.

Like so many other recent business books, Humans Are Underrated relies on a breezy style and lots of social science research. And like so many others, it rather overstates its argument. Colvin makes a very convincing case for empathy: It’s a wonderful, important trait, and one that can only improve how every organization operates. But is it the answer to all our employment ills? Are empathetic people assured of jobs that computers and robots can’t do? I doubt that. Colvin’s book is worthwhile reading for anyone interested in boosting the performance of his or her company or team. But for all we know, sooner or later, computers will learn to play together, work in teams, and tell stories, too. They may even learn to care about our feelings.

Topics: book reviews, technology, technology books
Get s+b's award-winning newsletter delivered to your inbox. Sign up No, thanks