Want to hire someone these days? You have to get out of your comfort zone, on many levels.

The U.S. economy has now entered its 98th month of expansion, making this the third-longest expansion on record, according to the National Bureau of Economic Research. The economy has added payroll jobs for a record consecutive 81 months. The unemployment rate is 4.4 percent. There were 5.666 million jobs open in the U.S. at the end of May.  Meanwhile, the baby boomers are aging out of the workforce at a rapid clip. And the robots are not yet taking all our jobs.

The labor market is a market, but it’s an inefficient one at best. People aren’t always concentrated where the job growth is, and jobs aren’t always concentrated where the people are. Several states, especially those in the northeast, are grappling with declining populations — even though they have robust industries. In Maine, the Wall Street Journal reported this week, about 5 percent of all positions are unfilled. 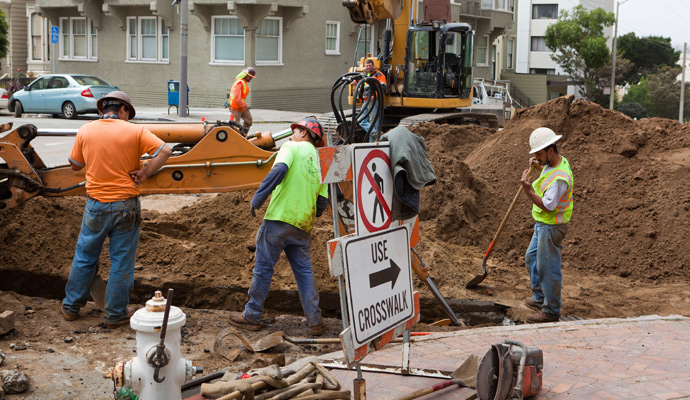 Photograph by B Christopher / Alamy

All of which means that the familiar and comfortable tools and tactics that companies have used to hire people — placing ads, indicating the needed skills, offering the wage they want to pay — is increasingly ineffective. In a range of industries, and in a range of geographies, there are signs that companies needing to fill posts have to start doing things they haven’t typically been comfortable doing.

For some Silicon Valley companies such as Google, which operate in a region where finding an affordable place to live has become a major issue, that may mean getting directly involved in employee housing. For farms in California, it may mean offering significantly higher wages, which can alter business models and reduce profit margins. In rapidly growing industries such as solar, some companies are taking a more proactive role in training employees.

And, in some instances, it may mean looking to hire some of the 600,000 people who get out of jail each year. That was the point of a fascinating article in the Wall Street Journal this week. “Erickson Cos., a Chandler, Ariz.,–based construction firm, has hired almost 30 former inmates from Arizona state prisons over the past year to build frames for new homes, an effort to cope with skilled-labor scarcity,” the Journal noted. “Erickson, which has about 250 employees in Arizona and roughly 1,000 nationwide, has been recruiting directly from corrections department job fairs for prisoners nearing release.”

There’s more. The director of education at Indiana’s Department of Corrections told the Journal that in his state, which has an unemployment rate of 3.2 percent, “I’ve never dealt with employers who are more willing to hire ex-felons.” Construction companies, in particular, “are literally begging for workers.”

Of course, there are many challenges to hiring people, and added challenges to hiring people coming out of prison. As the article notes, many ex-offenders don’t have high school diplomas, which is a requirement for many jobs. But the bigger challenge may be psychological and sociological. Over the decades a set of norms has grown up in our work culture that tilt against adding people with criminal records to the payroll. Some employers are concerned about liability, while others may operate in industries in which regulations bar people with certain types of offenses on their records.

But there is also a powerful set of informal barriers in place. If you were to ask a typical group of employees in a typical workplace in America, whether it is a bank, a restaurant, a consulting firm, or a construction site, if they’d be comfortable managing or working alongside someone who had recently been in prison, some significant percentage would respond in the negative.

It’s hard to get a good job if you have a criminal record, and it’s hard to avoid recidivism if you don’t have a job.

Again, that’s not surprising. Jail stigmatizes people. Those who have come out of prison have “a record,” and are often permanently stripped of the right to vote. At the same time, by definition, people who have been released from jail have paid their debt to society, done their time, and served their sentences. The expectation and hope is that, upon release, they will be productive members of society and avoid further trouble. And having a job that provides structure and a source of income is a key component of successful reentry into society. But it’s hard to get a good job if you have a record, and the data shows it’s hard to avoid recidivism if you don’t have a job.

The tight labor market seems to be providing a solution to this catch-22, at least for some former prisoners. And it’s noteworthy that many of the examples cited in the Journal article are in construction, an industry that has been largely immune to automation and that is suffering a significant labor shortage. Because demand for workers far exceeds the supply, construction companies are getting out of their comfort zone.

In a lot of ways, it’s just common sense for other industries to tap into this overlooked pool of potential employees. And if the labor market continues to tighten, more employers will have to leave their own comfort zones.