The age of automation seems to be upon us. Robots are delivering food in San Francisco. Last week, I had an uninspiring lunch at a largely automated quinoa joint in Manhattan. Self-driving cars are developing by leaps and bounds. Even in China, factories are using technology to substitute for workers on assembly lines.

The rapid (and rampant) rollout of labor-saving technology has inspired fears of a dystopian future in which there simply won’t be any work for humans. By this line of reasoning, as software and artificial intelligence become more powerful, gains in productivity are inevitable.

But if you’re skeptical of this view, you should look no further than a home construction site to back you up. 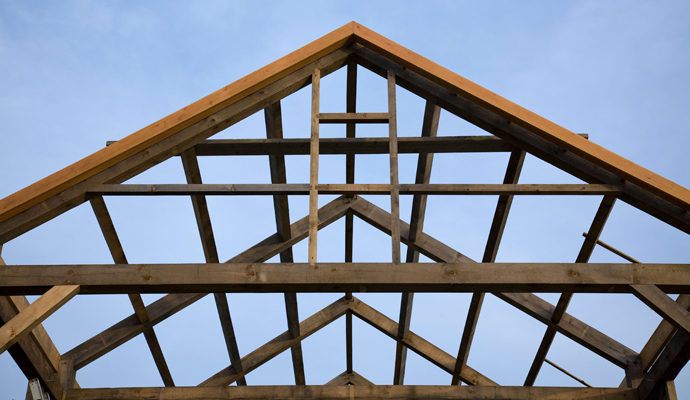 Home construction is one of America’s bedrock industries. After being laid low during the housing bust and the Great Recession, America’s homebuilding complex is back on its feet. Housing starts have been rising (pdf). Yet homebuilders complain that a shortage of workers is impairing their ability to keep building. The usual solution for industries facing labor shortages is to apply technology — reengineer business processes so that a home can be built with less human labor. But the reality is that in the U.S., at least, home construction seems to be remarkably resistant to technological improvements. Anybody who has ever conducted a frustratingly slow remodeling project can sense this intuitively. But there is data to support it.

Matthew C. Klein of the Financial Times recently compared homebuilding statistics in the U.S. and Japan. Japan, it turns out, has a noticeably higher rate of housing starts per capita in the 25­–54 age group, the prime demographic for home buying. And, he notes, there is a “higher number of housing starts per construction worker in Japan, especially since 2006.” (In the U.S., it is about .17 housing starts per construction worker, and in Japan, it is closer to .25.) “Another way of putting all of this,” Klein writes, “is that America built about the same number of housing units in 2016 as in 1992, but somehow required about 46 percent more people to do it.” By contrast, Japan built 31 percent fewer houses than in 2016 than it did in 1992, but the construction workforce in Japan fell by nearly 20 percent in that time frame.

Ed Zarenski, a construction veteran who runs the blog Construction Analytics, notes a similar phenomenon. Since 2006, at the height of the boom, he writes, the volume of new housing construction has fallen 29 percent in the U.S. But the number of home construction jobs is down just 22 percent. Crunch those numbers and we now require “27 percent more jobs now than it took before to get the same amount of work done.”

The problems may go back even further. In 2014, Cardiff Garcia of the Financial Times noted that in the “half-century through 2012, annual labor productivity growth in the U.S. construction sector averaged close to zero, and it has been negative for the past two decades.”

What gives? Well, there is something unique about housing. Typically, home construction activity is custom work — remodeling, renovation, teardowns replaced by a single home, maybe a few homes built on a cul-de-sac. And it is difficult to gain economies of scale — or to automate processes — when every job, or close to every job, is unique. If every T-shirt were made to order — different sizes, styles, cuts, fabric — it would be very hard to get a $3 T-shirt. Think about the sheer, overwhelming amount of choice people have when building a home: gravel or asphalt in the driveway, 500 different shingle styles to choose from, gas or electric heating, landscaping, appliances, bathrooms, and windows. To be sure, there are plenty of planned developments and apartment buildings built in the U.S. But even here there is a great variation from project to project, and within projects.

In addition, there are important differences between home manufacturing and, say, car or appliance manufacturing. Factories create their own artificial environments that are conducive to the task at hand: The whole structure is designed for the optimal flow of people and materials, and these factories can run around the clock stamping out hundreds, thousands, or millions of units of the exact same product. As a result, operators can systematically experiment with and apply technology, tweaks, and improvements to make the process run more efficiently. Voila! Productivity gains!

But with housing, by definition, the manufacturer often has very little control over the environment in which it operates. And so it has to operate slowly and carefully. Workers may be remodeling a kitchen while the family is living there — which means they have to tread lightly. Builders often put up a new house on a street filled with homes, which means they have to be careful about not disturbing the neighbors, or messing up the infrastructure. In many areas, you can’t do construction work on the weekends, at night, or in the early morning hours. Bad weather also interferes.

With housing, the manufacturer often has very little control over the environment in which it operates.

Because sites are typically small, construction has to take place in discrete, linear stages. Here, the industry’s historic mode of operating via small, specialized subcontractors also plays a role in limiting productivity gains. You call in one team to excavate the foundation. Then, when they’re finished, the concrete pourers arrive. Next, the framers do their thing. Later come the roofers, the plumbers, and the electricians. Each has to work sequentially to a large degree — so a single delay with a single trade, or poor coordination between trades, can throw the schedule off.

Of course, it’s hard to reap significant gains in productivity if you don’t use modern technology to its fullest. And, here, again, home construction seems rooted in an analog phase. Workers show up to job sites with specs and blueprints printed out on paper. In my experience, the preferred mode of communication on construction sites is yelling or talking on walkie-talkies or the phone. Although some mechanized equipment is used, and although some builders are experimenting with prefabricated efforts, a significant part of the work is done on-site and with human hands.

The irony is that this all seems to work quite well for the construction industry. And that may explain some of the complacency homebuilders seem to demonstrate when it comes to automation and efficiency. When the market is generally expanding, as it is now, and homebuilders are able to make profits by doing business as usual, there isn’t much impetus for change — especially when they can’t be disrupted by cheaper, more efficient foreign competition. Despite the complaints about worker shortages and the lack of productivity growth, the National Association of Home Builders sentiment index is near a record high.

It sure doesn’t look like robots will be taking construction jobs any time soon.