It’s a big question: Why doesn’t the United States have higher inflation? For the past decade, the Federal Reserve has kept the interest rate it controls at a remarkably low level, while aggressively expanding the size of its balance sheet. Economics textbooks tell us such moves should ignite inflation. And yet inflation has persistently been below the Fed’s target of a 2 percent annual increase.

It’s hard to have a wage-price spiral — one of the classic definitions of inflation — if wages aren’t rising. And here, too, we see another mystery. The unemployment rate is 4.3 percent, the U.S. economy has added jobs for a record 82 straight months, and there were 6.2 million jobs open at the end of June. These are all conditions under which you would expect wages to be rising sharply. And yet between July 2016 and July 2017, average hourly earnings for private-sector employees rose just 2.2 percent while average weekly earnings rose 2.8 percent. Again, not what you’d expect given the underlying conditions in the market.

Of course, the raw data doesn’t tell the full story. I believe that economists, policymakers, investors, and business leaders don’t grasp that the forces for deflation are more powerful and pervasive than previously thought. Some of those forces are highly visible and tangible: the influence of Amazon on the retailing sector, the relentless optimization of every business process. But some of those forces, such as hopes, fears, and expectations, are more difficult to see and measure. 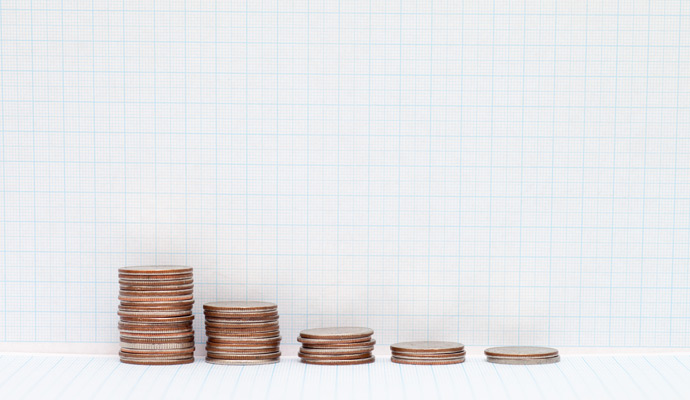 Illustration by RooM the Agency / Alamy

And there is a degree to which workers’ muted expectations for the future can be deflationary. To see what I mean, take a look at a study released by the New York Federal Reserve this week. As part of its Survey of Consumer Expectations, the Fed asks questions about how much people expect to get paid, or what it would take for them to accept a new job. And the data is illuminating.

In July 2017, respondents said the average expected annual salary offer over the next four months was US$50,790. That’s down 2.6 percent from the expected $52,131 in July 2015, and down by a larger margin from more than $54,000 in March 2017. Next, look at the data on the so-called reservation wage, i.e., the average lowest wage respondents said they’d need in order to accept a new job. Between November 2016 and July 2017, that amount fell 7.1 percent, from $62,456 to $57,964. One more data point: In July, the average expected likelihood that a respondent’s current employer would match an outside job offer was 25.9 percent, which is essentially unchanged over the last two years.

At a time of nearly unprecedented labor market tightness, people are dialing down their expectations for how much they’ll be paid, the salaries they’ll accept, and the likelihood of their own company matching an outside job offer.

What’s going on? The labor market is, of course, a market. And every effort to hire (or retain) an employee involves a negotiation. Companies are reluctant to pay more if they don’t have to, but will increase wages if they absolutely need to do so to fill a position. But it takes two to negotiate. And if one side has lived through a very difficult economic time and doesn’t have positive expectations about the future, it will lower its ambitions, and, in effect, negotiate against itself.

Sure, the hard data that underlies the dynamics of markets matters a great deal. But factors that are more difficult to quantify — norms, assumptions, fears, hopes — can also have an impact on behavior. People who lived through the Great Depression altered their habits and expectations surrounding financial behavior for decades — e.g., avoiding debt, not investing the stock market.

At a time of nearly unprecedented labor market tightness, people are dialing down their expectations for how much they’ll be paid.

Today, many workers, at every level of the income ladder, remain shell-shocked from their experience of the past decade: the financial crisis and ensuing Great Recession of 2007–09, mass layoffs and high unemployment, companies ruthlessly holding the line on pay increases even as profits rose with a strengthening economy, and continual reorganizations and restructurings.

Workers, even those with highly valued skills, are worried about maintaining employment. They’re fearful of losing income and benefits. The continuing waves of disruption mean there is no guarantee their job, or company, will be there in a few years. They’re concerned that if they quit a position now it may take a long time to find a new one, and that they may have to accept a lower salary when they do. There’s a sense, among many, that the best they can hope for is to preserve what they have. Employers, especially in industries where job loss has been significant, use their understanding of employees’ concerns to their advantage.

This mind-set is totally understandable and rational, given recent history and the current climate. And it’s likely that it has taken a toll on expectations, and hence on workers’ willingness to ask for more. If enough people think a certain way, it will start to factor into behavior that we can track. Indeed, one of the more interesting findings in the U.S. Labor Department’s monthly JOLTS report on job openings and labor turnover is that the rate at which workers are willing to tell their bosses to take this job and shove it isn’t budging. In June 2017, only 2.1 percent of Americans quit their jobs — virtually the same proportion that did so in June 2015.