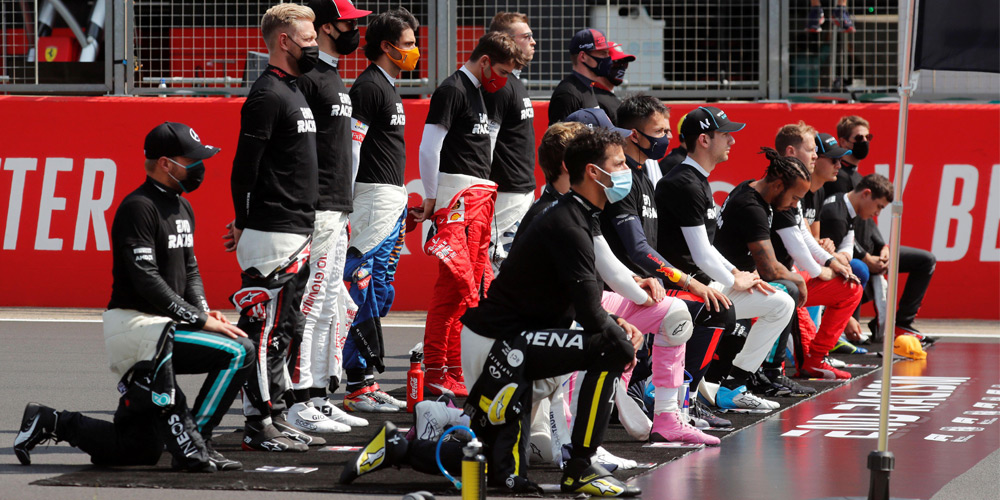 Lewis Hamilton (front row with head bowed) and other drivers kneel in support of the Black Lives Matter campaign before the start of England’s 70th Anniversary Grand Prix, in August 2020.
Photograph by REUTERS / Alamy

In June, just before England and Manchester United soccer striker Marcus Rashford persuaded the British government to perform a U-turn and extend its free school meals voucher scheme into the summer because of the continued impact of the novel coronavirus, he said: “Ending child poverty is a bigger trophy than any in football.”

His England national squad teammate Raheem Sterling has inspired young players with an eloquent takedown of structural racism in the media. Hector Bellerin, a Spanish international player, promised to plant 3,000 trees for every game his club team, Arsenal FC, won before the Premier League season ended in July. And more than 100 soccer players, coaches, and teams have joined the Common Goal charitable movement, donating a percentage of their salary to good causes.

The movement extends beyond soccer. Last year, Formula 1 champion driver Lewis Hamilton wrote on Instagram: “I want my life to mean something.” This year, he led a majority of drivers in taking a knee in support of Black Lives Matter at the start of the Austrian Grand Prix on July 5, an action that has since been repeated at subsequent races.

This is a new moment in a long tradition of sporting activism. Players are following the paths of boxing legend Muhammad Ali, Brazilian soccer star Socrates, and, more recently, Colin Kaepernick of American football fame and Megan Rapinoe, star of the World Cup–winning U.S. women’s soccer team. But the difference now is that their organizations are listening.

This is a new moment in a long tradition of sporting activism. But the difference now is that the players’ organizations are listening.

“I support [the players] in using their platforms to push good causes,” said English Premier League CEO Richard Masters in June. Days earlier, the U.S. Soccer Federation rescinded a 2017 rule that banned protests against injustice during the national anthem, and the federation’s new president, Cindy Parlow Cone, issued a public apology to Rapinoe, who had objected to the rule.

Soccer’s decisions are following a global trend. In business, social responsibility is beginning to be seen as a superpower — and one that can be measured for investment purposes. The sporting examples reinforce the idea that empowering talent to act on purpose can increase engagement and, in some cases, performance.

Take Ben Mee, captain of English Premier League soccer team Burnley. He faced the TV cameras in June after his team put in a ragged performance and was beaten 5–0 by Manchester City. The score line was only half the story that day. A handful of Burnley fans had arranged for a banner bearing the phrase “White Lives Matter Burnley!” to be flown over the stadium before the match.

“I’m ashamed and embarrassed” at the fans, said Mee. “They need to come into the 21st century and educate themselves. They don’t represent what this club is about.” After his interview, Mee was praised for his leadership and honesty, which changed the narrative that day. Burnley’s defeat will be remembered for Mee’s intelligent, decisive response more than his defending, and for how he used his platform to deliver a message to encourage education and improvement.

These new measures of success — having a purpose and making a greater impact — are more culturally important than ever. And Burnley went on to win its next two matches without conceding a goal.

Therapist Esther Perel calls this focus on purpose the identity economy; it rests upon a work environment where millennials want to be, and show, the best version of their true selves. Mee was signaling, through his platform and within his work environment, that he wanted Burnley supporters to be part of the solution, not the problem.

In business, surveys show that young people want a workplace that gives them a sense of personal development, purpose, and meaning. “The identity economy asks not, ‘What am I going to do next?’ but, ‘Who am I going to be next?’” Perel explains. “You need to know what you believe in and then pursue it.”

This new definition of success asks itself another question: Which side of history do you want to be on? Nearly 80 percent of business leaders surveyed in PwC’s Putting Purpose to Work report agreed that having a sense of purpose is central to success. But only 34 percent said that purpose was used as part of leadership’s decision-making processes. That survey was done in 2016. Let’s hope things have changed in the office as much as they have on (and off) the field.

In the identity economy, employees’ professional choices reflect not just who they are and what they feel, but also what they stand for. So, in this new world, traditional, linear measures of success — profit, promotion, and awards — are no longer enough. Concepts such as doughnut economics (the idea of realigning economic goals toward thriving in balance instead of growth) and upcycling (the process of transforming by-products and waste into usable materials) are challenging companies to redefine profit and progress.

Soccer teams are understanding this: At Danish team FC Nordsjælland, every player at every age level works on a “give-back” project dedicated to helping the community. Chairman Tom Vernon, whose team was the first to appoint a head of character development, challenges his players to improve based on core foundations of football, education, and character development. “We empower the players with the skills and understanding of their opportunities, rather than having them focusing solely on money-making and taking the wrong development decisions for themselves,” he said of the initiative.

Other teams have similar socially minded projects. In the U.K., Forest Green Rovers is proud of being the first ecologically sustainable team. Owner Dale Vince has ambitious plans to build the greenest stadium in the world. German coach Christian Streich, manager at SC Freiburg, demands his players engage in political stories and develop their own social conscience. Freiburg players, including striker Nils Petersen and former defender Caglar Soyuncu, are among those to have addressed the whole squad to talk about democracy, the rise of populism, refugees, and other social issues.

As one soccer agent said: “The industry has learned that the current crop of stars want to be remembered for their stances off the pitch as much as their performance on it.” And so having a meaning to your efforts, knowing your purpose, and believing in it are more relevant than ever. In other words, if you want to retain talent and be successful, companies, including sports organizations, will need to demonstrate that they can deliver impact, too.