A curious movement seems to be taking root in developed economies, anchored in an apparent contradiction: well-being without growth. Proponents of this future state, dubbed the “post-growth economy,” challenge the idea that GDP gains are necessary for people and societies to prosper. Instead of pursuing expansion, they argue, we can achieve progress by setting limits: on natural resource use, working hours, debt, and income inequality.

This thinking isn’t groundbreaking. In their 1972 book Limits to Growth (pdf), Massachusetts Institute of Technology researchers Donella and Dennis Meadows warned about the dangers of a global “overshoot.” And even earlier, in developing countries rebuilding after European colonization, influential figures such as India’s Mahatma Gandhi spoke against expansionist economic policies. These ideas, which were once pooh-poohed, are now catching on in the world’s richest economies. In Europe, more than 200 academics, mostly from elite institutions, recently wrote an open letter to E.U. member states urging them to “explore possibilities for a post-growth future.” And I detect a similar sentiment seeping into U.S. culture, albeit subconsciously. 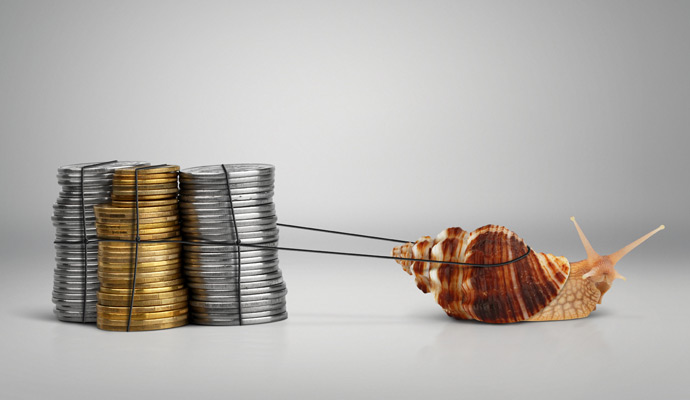 New and emerging policies aimed at improving Americans’ well-being are tempering the pursuit of growth at any cost. Some decidedly, if not overtly, post-growth ideas, such as a jobs guarantee or less trade, are associated with partisan politics. But a few others, such as setting higher minimum wages and giving individuals greater control over their privacy in the digital age, have bipartisan support. Surprisingly, these burgeoning movements that seem to call for limits to growth are coming at a time when the U.S. economy is expanding at a steady clip. Academics might cringe at some of the accompanying political rhetoric, but look closely and you’ll see that these apparently unrelated ideas reflect a core principle of post-growth economics: When growth hurts, equity is the cure.

Despite evolving policies and fresh perspectives — including Oxford University economist Kate Raworth’s surprise hit book, Doughnut Economics, which points to a no-growth “sweet spot” — ending our dependence on growth, if that is indeed where we’re headed, is still uncertain terrain. Businesses must contribute their ingenuity and resources to explore viable alternatives to the growth paradigm, experiment with new approaches, and help shape new structures and systems.

What’s Speeding Up the Slowdown?

Even die-hard growth enthusiasts know the U.S. GDP won’t continue to increase at its current rate. The Congressional Budget Office (CBO) projects that real (inflation-adjusted) annual GDP growth will slow from 3.1 percent in 2018 to 1.7 percent by 2023, hovering there through 2028. By then, the CBO expects federal debt to be almost 100 percent of GDP, making it hard to stimulate the economy. To most people, though, incomes and wages matter more than GDP growth. Over the past four decades, the average American’s purchasing power hasn’t changed, according to data from the Bureau of Labor Statistics. Many expect things to worsen, too, as artificial intelligence (AI) comes knocking on factory and office doors.

Businesses must contribute their ingenuity and resources to explore viable alternatives to the growth paradigm.

It’s no surprise, then, that concerns about wages, jobs, and skills have become areas of rare bipartisan consensus in the American polity. Consider President Donald Trump’s popular trade policies that envision localizing production and boosting domestic wages. As PwC recently pointed out in its analysis of the U.S. midterm elections, some provisions in President Trump’s United States-Mexico-Canada Agreement (the new NAFTA) appeal to Democratic lawmakers, too, making its approval likely. These points include requiring that 75 percent of a car be made in North America and 40 percent of the material come from a “high-wage” factory.

When it comes to the ecological impact of expansion, views remain deeply divided. But evidence that unbridled growth could self-destruct is mounting. According to the National Climate Assessment’s recently released federal report, climate change could negatively affect U.S. GDP and even result in an increase in life-threatening conditions and diseases.

Even those considering alternatives to growth economics disagree on the details of how to design that future. That’s inevitable, because post-growth economics covers a lot of ground, from production and population to consumerism and debt. But a common thread in these debates is the idea that a resilient future should be built on what already exists. And that’s where businesses come in.

Consider the aim of universal basic income (UBI) programs: creating an income floor no one falls under. Some see it as a sound way to redistribute income, but others believe the emphasis should be on bolstering public services instead of making cash distributions. To find out what works and what doesn’t, local governments and businesses can pilot programs together in low-risk ways. For example, Stockton, Calif., just 80 miles from Silicon Valley and a poster child for America’s foreclosure problem, will become the first city in the country to experiment with a UBI plan, on a small scale and with support from tech company donors. Another post-growth idea that businesses can influence is a move toward shorter workweeks, which some think might better distribute jobs. Companies experimenting with cutting down the workweek have reported gains in employee productivity and morale, and those results could help shape future policy.

But companies can do much more. Beyond contributing to social safety nets, businesses can apply new technologies and innovations toward meaningful social progress. AI can be used in environmental areas (pdf) — for example, in natural disaster response, conservation, and precision agriculture — but it also raises concerns about bias, privacy, and safety. New rules and principles to boost privacy protections and promote responsible AI might temporarily put the brakes on growth and innovation. But setting limits could eventually engender trust, encouraging people to share more information and to access new services from companies they can count on. The bottom line: As cities and states devise local climate change adaptation strategies, from redesigning energy and transport infrastructures to addressing food security and managing drought, they will look for groundbreaking solutions from business.

The future is uncertain. But there is broad agreement that growth in mature economies will slow down, and more importantly, there are signs that society wants it to. Businesses should hurry up and help shape the slowdown.