The suicide mission came directly from the president of the United States in 1898: Go behind enemy lines in Cuba, find rebel commander Calixto García at his base in the inhospitable Sierra Maestra mountains, and win his support for the American campaign against Spain. One solider, Lieutenant Andrew Rowan, volunteered to follow this seemingly hopeless order. But Rowan ultimately succeeded in the mission, convincing the Cubans to join the American cause and winning the nation’s second-highest honor, the Distinguished Service Cross.

This mission became the historical context for the 1899 essay “A Message to Garcia” (pdf), written by Elbert Hubbard, which is still used to train aspiring U.S. Army infantry officers on the essence of followership. And although the study of leadership outshines that of followership in both the military and the corporate spheres, followership is an important concept in both realms. Followership doesn’t mean blindly following orders, or turning into a sycophant. (Indeed, in his book The Courageous Follower: Standing Up to and for Our Leaders, executive coach Ira Chaleff highlights several ways for followers to assert themselves effectively.) Rather, followership is all about interacting in a skillful way with your leadership to benefit both you and your organization. What’s more, learning how to be a great follower is a requirement to becoming a truly great leader. 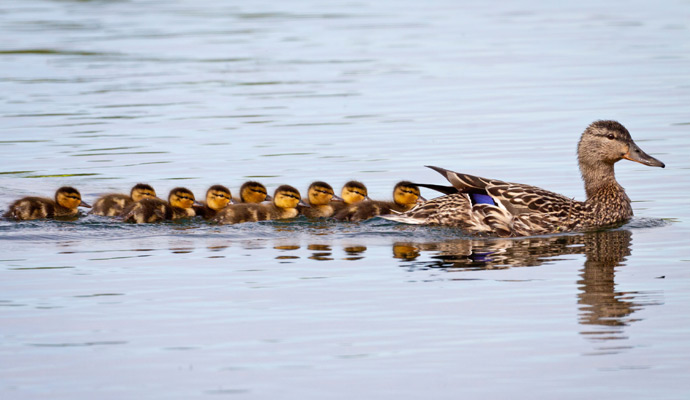 In the iconic leadership tome Good to Great, Jim Collins introduced “Level 5” leaders, those executives with the highest leadership capability. Collins and his colleagues studied companies that appeared on the Fortune 500 list between 1965 and 1995 and identified those that were able to beat market industry returns significantly over a period of at least 15 years. One of their key findings was that the presence of a Level 5 leader at the helm distinguished great companies from good. These are leaders who build enduring greatness through a “paradoxical blend of personal humility and professional will.” Collins described these leaders as “more like Lincoln and Socrates than Patton or Caesar.” In Collins’s view, practicing followership helps inculcate the sense of personal humility central to becoming a Level 5 leader. Great followers “[channel] ambition into the company, not the self,” Collins wrote.

A great follower can use the daily process of doing work for someone to become an opportunity to develop personal humility. On a daily basis, followership means subjugating your will to the will of your leader or organization. How you spend your time, where you work, when you take lunch, and often where you live is subject to the leader’s decision. Accepting these strictures without mindfulness will not make a person a great follower. Rather, practicing great followership means doing these things with a very specific purpose. Robert Kelley, Distinguished Service Professor of Management at Carnegie Mellon’s Tepper School of Business, has studied and written extensively on followership. His research reveals that effective followership comes from a combination of critical thinking and enthusiastic participation. Successful followers can thoughtfully transfer their goals, ambitions, or ego to their leaders. When their leaders succeed, the followers’ needs are met.

These insights allow us to construct a few basic tactics for developing a fail-safe and effective followership practice.

Know your leader’s comfort zone. A great follower understands how external conditions and their actions affect the leader’s well-being. Their comfort zone is informed by a number of factors including the work on their plate, their competence, and their life outside of work. As a follower, you know your work may be a small part of your leader’s day. It is important, then, to pay attention to what irritates your boss and how you can avoid sparking negative emotions.

When a colleague was concerned about a combative relationship with her boss, we analyzed their relationship and found something interesting. Arguments tended to occur on calls when she emailed the discussion material five to 10 minutes before the meeting. Conversations with others who worked successfully with her boss helped us identify the root cause: He used an iPad, and PowerPoint–format presentations were displaying as distorted on his device. He became irritated because he could not understand what he was seeing. When my colleague, now cognizant of the need to stay in the leader’s comfort zone, started sending PDFs in addition to PowerPoint files, their relationship changed dramatically.

Of course, understanding the comfort zone goes deeper than getting a handle on what device a person uses. You have to grasp how your leader has developed his or her personal operating system. Ira Chaleff highlights several more personal and psychological questions to help you understand your leader’s comfort zone. These include:

Stay within the comfort zone. Once the borders of the comfort zone are identified, it’s important to stay within them. A colleague of mine was reporting directly to the leader of his practice on a short-term project. The leader was mild-mannered, but would occasionally express concern that progress on a deliverable “made him nervous.” Clearly, staying on track and meeting deadlines was a crucial value and need for the leader to stay in his comfort zone. Rather than dismiss the comments, however, the colleague quickly marshalled resources to ensure rapid progress was made. As a result, he not only had a successful project, but he also was rated very highly during our annual review process.

Work to expand the comfort zone. At an organization I once worked with, they had a saying: “We throw you in the deep end and, if you tread water, we throw you a 10-pound weight.”  Warm and fuzzy? Maybe not. But it highlights how leaders are willing to expand their comfort zone when you do the work, anticipate needs, and willingly shoulder new responsibilities.

You have to grasp how your leader has developed his or her personal operating system.

In his book Team of Teams, General Stanley McChrystal tells the story of Navy SEAL Lieutenant Commander Conway (a pseudonym used in the book). Conway was sent to be a liaison between the U.S. embassy of an “unstable Middle Eastern country” and the elite task force hunting al Qaeda in Iraq. He was unwanted by the leaders at the embassy, whose insular culture viewed him as an outside agent and potential threat to their careers. And so even though he was a SEAL, with numerous skills to help the embassy leaders achieve their aims, he was ignored. Rather than resort to passive aggression, though, Conway labored to make his new leaders more comfortable with him. He volunteered for the one task on which they would accept his help: He emptied the trash every afternoon. Over the course of three months, he worked to “expand the comfort zone.” Then, as the threat from al Qaeda grew in the country, he saw an opportunity and assumed new responsibility — helping the host country develop new force-protection measures.

The idea that leadership and followership are separate is false. And maintaining that stark divide ultimately hurts our ability to build and create, together. As Susan Cain, author of Quiet: The Power of Introverts in a World that Can’t Stop Talking, put it in a recent New York Times article on the need for more effective followers: “Perhaps the biggest disservice done by the outsize glorification of ‘leadership skills’ is to the practice of leadership itself — it hollows it out, it empties it of meaning. It attracts those who are motivated by the spotlight rather than by the ideas and people they serve.”

Like a bird with two wings, leadership and followership are part of an inseparable system. Using the tactics of fail-safe followership can make you more successful in your career and prepare you for leadership roles.